copyright by 3ViertelElf
Interviews, Passenger of the Month | by Jorin Zschiesche | 20. July 2015

3viertelelf: “I’ve known of recordJet from almost the beginning. I followed its rise to success and think the concept is terrific.”

Interview with 3viertelelf, recordJet Passenger of the Month in July 2015

3Viertelelf… how did you come up with the name?

Our first concert as a band without a name was on a Saturday night in 2013. We were under a bit of pressure and, after some wine and beer, somehow got hung up on our stage time of 10:45 pm. Plus it rolls off the tongue so nicely (in German).

Angela: At my house, there was always singing and music going on, whether at home or at church. So for me, it manifested early. Plus my brother wasn’t just 10 years older than me with cool musician friends, he was a musician himself. I wanted to be part of his band so badly, it was so cool.

Christian: A friend of mine had a drum kit and I had a guitar.

Lars: After my first day at elementary school, 3 teachers set up a guitar, flute and keyboards, and said to us, “Kids, what would you like to learn?” I knew the answer immediately: the one with all the colorful buttons and lights!! That’s how it started…

Philipp: Creative work was the norm in my musical family, so I was making music before I even knew that I wanted to become a musician. I started with piano lessons at age 12, but it quickly became too boring for me. Until I discovered the drums, I preferred to rap and listen to hip hop. My uncle had a drum kit, so whenever I could, I would sit down and learn my first grooves. I joined my first band a year later and at that point, I knew I wanted to do music.

Why and how did you end up at record Jet?

Angela: I’ve known of recordJet from almost the beginning. I followed its rise to success and think the concept is terrific. I also feel personally connected to the people behind it. And another important aspect is that its distribution is the best and cheapest way for young and independent artists to distribute their music.

Philipp: I listen to anything with a heart and soul. Jazz, rock, electro, punk, RnB, EDM, classical, doesn’t matter. If it moves me, it’s good.

Angela: Lots of running, messing around in front of the camera, clearing my head, reading and even more writing, awkwardly playing around on the piano.

Lars: Playing and watching football (lots of sport in general)

Philipp: After music, there’s nothing for a while, then there’s writing. Then making things, creating. In any case, being creative regardless of in which context. Acquiring knowledge, I’m like a sponge, I love information. If I’m interested in something, I try to find out everything about it.

Angela: Woah, that’s a complex question. The biggest problem is that we find ourselves in a gray area. Record sales are declining, but label contracts haven’t been adjusted accordingly. Albums and even the music itself have been devalued, in my opinion. Today it’s more about the song or the remix of a song. The songs that Spotify and co. offer don’t achieve the same income as CDs used to. The good thing is that you can be more independent as an artist, for example with distribution through recordJet or systems like crowdfunding. The Internet has made a huge step forward in general. Sure, songs can be streamed for free, but you can attract a lot of attention through YouTube, Facebook and Instagram. It’s easier to be there and do something, even if it gets confusing with the plethora of other acts that are also there.

The biggest problem is that you first have to overcome the difficulties that the technological developments of the past 20 years have brought us, especially when it comes to evaluating your own work. At the same time, these technological advances are a great opportunity to reshape the music industry in such a way that musicians and their audience are in a direct exchange with each other. With a bit of luck, you can be both successful and still independent as an artist.

Angela: Rosa Parks for her courage, Hildegard Knef for her brutally honest lyrics, and every single person who knows how to keep their fire burning.

Christian: Zack de la Rocha: “It’s all about building up that rage, all that fear and shit that it takes to come out on stage!”

Philipp: Just anyone who shows through their gestures or in some other way that humans basically have a good soul. It can be the friendly vegetable salesman at the corner who always has a few words and a smile for everyone, or someone who helps you unexpectedly. It’s the people who give you courage and inspiration. Almost anyone can do that.

Angela: I think the first album was Lauryn Hill “The Miseducation of Lauryn Hill”, and the most recent album was The Jooles via Crowdfunding.

Christian: The first: Pedro the Lion “Big Trucks”. The most recent: Atoms for Peace “Amok”

Angela: I can’t quite decide where in Asia I’d like to go, but Japan and China are right up there. I could say it was for the culture, that too, but I’m first and foremost a creature of enjoyment so I would be most excited about the food.

Christian: Hawaii, because I wouldn’t have to worry about warm clothes anymore.

Lars: Carnival in Rio, but as a musician!!!

Philipp: Maybe New York or New Orleans, to get an impression of the country in which the majority of the music that we celebrate comes from, at least originally.

Tell us your favorite joke

Angela: Two toothpicks are walking through the forest. They see a hedgehog approach. One toothpick says to the other toothpick “I had no idea they had buses around here.”

Christian: A resident of Stockholm goes duck hunting in the country. When he sees a duck, he aims and shoots. But the bird falls onto a farm, and the farmer who owns it won’t hand over the prey. “That’s my bird”, the city dweller insists. The farmer proposes to settle the dispute with a kick in the groin, as is usual in the countryside. “The one who screams the least gets the bird.” The city dweller agrees. The farmer goes first and lands a powerful kick in the man’s nether regions. He collapses and stays lying on the ground for 20 minutes. As he gets up, he gasps “Ok, now it’s my turn.” “No”, says the farmer as he walks away. “Here, take the duck.”

Any last words? What do you want to say that you haven’t been able to express so far?

Angela: I support the unconditional basic income! And I hope that we can go climb trees again and be less virtual.

Lars: Eventually, everything has been said ?

Christian: “Er macht die Knöpfe fest und drückt sie rein. Wir können alles und alles können wir sein!” (He fastens his buttons and pushes them shut. We can do everything and we can be anything!)

The Living
FOXOS: Interview with our Passenger of the Month in October 2014 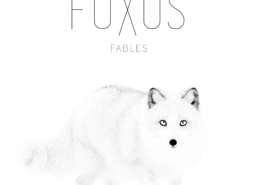 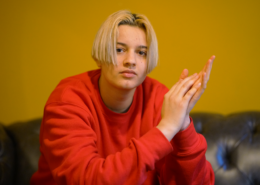