copyright by The Living
Interviews, Passenger of the Month | von Carolin Wohlschlögel | 11. April 2016

The Living: “Looking at social media, you can see how different musicians and bands help and support each other. We think this is pretty nice.”

Interview with The Living, recordJet Passenger of the Month in April 2016

We are The Living and consist of five musicians. Two pairs of siblings and one adopted guitarist.

The Living – How did you get that name? Tell us the story, please.

The Living came up when we were writing a song and while we were looking for a band name. The phrase in the song goes like this: „And for you I’m still amongst The Living“.

Our singer Karlo met our bass player Jojo when he was sitting in a bus on his way to school. Jojo had his guitar with him and Karlo just asked him if he was interested in playing in a band. That’s how it all started. Soon after, Karlo’s sister Kati joined playing the drums und Jojo’s sister Kathi playing the keyboard. Some time later we also met our guitarist Simon at our school. This was the beginning of our band. Luckily, all of us could already play our instruments.

While we were researching the internet we came across recordJet. We had planned on releasing our next EP through a new distributor and recordJet made a very appealing and simple appearance with many different services. Furthermore, recordJet impressed us with a clear and transparent structure.

In private our taste in music couldn’t be more different. Some listen to blues and soul, others listen to hip hop or indie-pop. We are also open to the singer-songwriter genre. This influences our music style very much and brings many facets to it, but at the same time can still be associated with us.

If we wouldn’t be making music, we would probably study something or working in some kind of ordinary job.

The biggest problem is the decrease of physical record sales in the past years. Everything is being streamed or downloaded. But we as musicians depend on the record sales in order to pursue making music. But at the same time, the streaming services are also a good way to make music available fast and for many people. The most positive thing about the music industry today is the close connection between the artists. Looking at social media, you can see how different musicians and bands help and support each other. We think this is pretty nice.

What was the first and latest album you bought?

First record: Linkin Park – Meteora (since we aren’t that old yet)
Most recent record: Twenty One Pilots – Blurryface

If we would have the real recordJet at our disposal for one day, we would fly to California. That would take two days, but you could just drop us off and leave us there ;)

Tell us your favourite joke

A band is playing a gig.
The singer is thinking: „Wow, my singing is awesome today. I have the people at my feet.“
The guitarist is thinking; „Yeah, my guitar riffs sound awesome and now I will play a really dope solo.“
The drum player is thinking: „Man, am I tight again. I’m having so much fun today.“
And the bass player is standing on stage, nodding his head and thinking: „E E E A A E E“.

Nothing much really, besides thank you and see you at our next gig. We can have a chat then :) 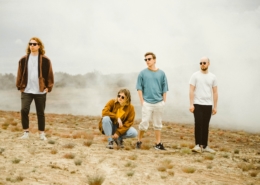 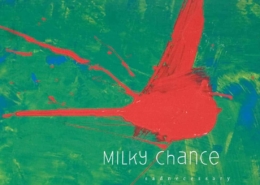