Level Up Your Music with Spotify Canvas

Spotify Canvas has recently become available for all artists. Nice! But what is it actually about? Canvas is a Spotify function that allows you to add a small looped image to your songs. It’s like an album cover for the age of streaming. What it should look like or what is depicted on it is completely up to you – just like cover artwork. It gives your music the finishing touch. What are the benefits? A lot of attention!

Why do I need a Canvas?

You or your team can now upload, modify and edit the short clips on Spotify for Artists immediately. A Canvas can be changed as often as you like – so you can use different clips alternately/one after the other as a Canvas. And it doesn’t just bring great benefits on Spotify: for example, your current Canvas is also played in the background of an Instagram story when someone shares your track via the app.

How do I upload my canvas?

What are the rules?

You can and should give free rein to your creativity, but there are a few legal points to note:

How do I create a good Canvas?

So, you understand the benefits and now want to create as good a Canvas as possible? There are a couple of details to consider. You can use image material between 3 and 8 seconds in length for your Canvas. This might sound short, but it is enough to give a visual impression of what is going on. As a Canvas runs in a continuous loop, you should make sure that the first and last frame are identical or connect to each other so that a fluid image is created.

Fast cuts and wild graphics in such a short period of time can be rather irritating. Try to tell a complete story within the given time. It’s better to craft a new, small story for the Canvas, than to shorten the music video down to incomprehensible fragments. This also gives fans the feeling that they are getting even more insight into the story and the thoughts behind the song. Win-win!

Also note when choosing the image that anything on the edges outside the safe area of the Canvas may not be displayed on some mobile devices. Now all you have to do is get started! For more information about Canvas, visit Spotify.

Spotify meets Shopify! So what exactly does this mean for you as an artistYour merch on Spotify – shopping and streaming now go hand in hand! 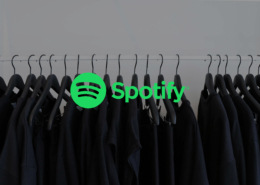 Direct access to Spotify for Artists – now very easy through your recordJet accountNow you have even easier access to your statistics, pitching and editing options