copyright by Jonas Höschl
Passenger of the Month | by Julia Szymik | 1. July 2021

Passenger of the Month in July 2021: Buntspecht

From #1 in the Austrian album charts to Passenger of the Month: Buntspecht!

Buntspecht was born in 2017. Some band members were long-term friends, others were new acquaintances formed whilst wandering the streets of Vienna in the dead of the night. This led to an eclectic cast of musicians (some of which had not yet handled an instrument) all ready to make music, and more importantly, to have fun doing so.

A year after their inception their debut album “Großteils Kleinigkeiten” was released in 2018. This was followed by their second full-length “Draußen im Kopf” in 2019.

The unconventional nature of the band was reflected in their sound, with both the press and the band themselves often tripping up over their own tongues when trying to put it into words: Sacral, occult, old-school Bard pop. Ballad Acid Chanson. Brass band string orchestra/80s slap bass drum machine. Children’s songs for adults.

This surreal yet addictive sound wasn’t restricted to the music, but was also evident in the lyrics, with vocalist, Lukas Klein shaping the German language at his will. He created his own abstract terms such as the “Waschmaschinentango” which was conveniently placed on the parquet flooring. Whereas, in the track “Guten Tag” he dreamed of wandering far enough into the distance “until I can see myself from behind”.

After two outstanding albums Buntspecht’sunpredictability remained as they continued to push boundaries. Their so-called half-album “Wer jagt michwenn ich hungrig bin” added another, rather minimalistic layer to their repertoire, with the tracks consisting of song sketches and slam poetry improvisations.

With Buntspecht’s current album, “Spring bevor du fällst” topping the Austrian charts they show no sign of waning on their mission to push their creativity to new levels. They may not know how to describe their sound, but they sure know what they want to do with it. The journey that began on those fated nights in 2017 continues for Buntspecht, and more and more of us want to get in on the fun. 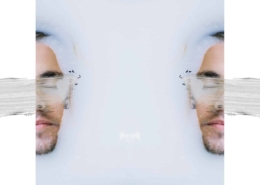