grim104: “I would have liked to become a forester, but without shooting animals.”

Interview with grim104, recordJet Passenger of the Month in November 2019

Who said it would be easy to get a hold of a count like Graf Grim personally? That’s right, nobody! That’s why we are filled with pride of the fact that the one and only Graf Grim has descended to answer our questions and offer us more or less deep insights into the heart and soul of a proud Transylvanian count!

Lie to us: What is the much more exciting, but completely untrue story about how your stage name came about?

When George Neville was appointed Archbishop of York in September 1465, he took advantage of the festivities to demonstrate power and wealth by serving no less than 400 swans, 1000 herons, and 104 peacocks in addition to oxen, sheep, pigs, and numerous poultry. In memory of this immodest Lord Chancellor I have chosen the 104. Why I am called grim is an even longer story that cannot be told here and now.

What is the funniest anecdote from one of your concerts, or the most unbelievable thing that has happened to you?

At Splash 2015, where we had our first regular Splash gig, the then very hip A$AP Rocky also played. Since he and Zugezogen Maskulin played on the same day, he and his entourage had already spent the day in their backstage container. And who was suddenly standing at the stage stairway after our show when we left the stage completely sweaty and happy? Absolutely right, A$AP Rocky. The sound had made him curious and now he greeted us with “Sup guys, show was lit! Completely perplexed we accepted these unusual props and wished him lots of fun for his show in the evening. His manager acquired two shirts from our merchandise tent and now and then we still correspond with our unusual musical acquaintance from Harlem.

What are your musical “guilty pleasures”?

In your opinion, which musicians have influenced the music industry the most (and why)?

Clearly Boney M. 150 million records were sold worldwide, including 60 million singles. With ten number one singles and a stay of 256 weeks at the top of the charts, Boney M. is in first place among the most successful German bands ever.

What is an absolute must have in your studio/rehearsal room?

If you hadn’t become a musician – what would your alternative passion be? What else would you have done with your life?

I would have liked to become a forester, but without shooting animals. But what a beautiful idea: The sun hasn’t risen yet, but it’s already light. My leafy green jeep stops at a forest parking lot. I, dressed in a felt hat and coat, open the trunk and an enthusiastic black dog jumps out of the car and runs joyfully excited in circles around me. I grab my backpack and disappear whistling into the woods.

You are active in the music business. What do you think is the biggest problem and the greatest thing about the music industry today?

Is that a trick question?

Why and how did you end up with recordJet?

Through many recommendations and my need to find a digital distributor that combines extensive autonomy and good shares perfectly. Unsexy answer, I know!

Watch the music video to “Graf Grim” by grim104 here:

Passenger of the Month in October 2019: Brenk Sinatra 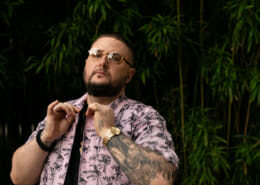 Daniel Shaked
Passenger of the Month in April 2020: Mavi Phoenix